M.A.I.C. March Athletes of the Month 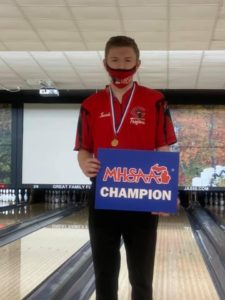 He is very knowledgeable and technical in his game and shares his knowledge amongst his teammates when he can. Both in practices and meets he not only performs at a high level on his own game, but he encourages, motivates, and checks on how his teammates are improving. His hard work and team player mentality helped drive his team to be Conference Champions, while ending the Regular Season with the highest conference average of 205. At the same time, assisted his team to Clarenceville’s highest series record with 1137 and congratulated his Senior teammate, Ryan Bishop, as he bowled his perfect game of 300 in that series. Jacob continued his support of his teammates as they reached the Division 3 Regional Tournament where he not only took first place as an individual bowler with a total of 925 pins (second out of the state in all 4 State Divisions), he was a tremendous asset in leading his team to their Back to Back Regional Championship with a total of 4050 pins (second out of the state by 9 pins in all 4 State Divisions). Jacob didn’t stop there as his team went onto the State Tournament where they qualified for match play with 1180 total pinfall to place them in the 4th seed. Unfortunately, the team lost in the first round of match play. The following day the State Singles competition was underway and Jacob kept the Trojan Spirit with him as he qualified for match play taking the 1st place again with 1324 total pins.  His teammate, Senior Ryan Bishop, took 8th place and both were set up for match play. Jacob won his first match-up and was excited to go against his own teammate Ryan, who unfortunately lost in his 1st match-up. Grasping onto his Trojan Pride, he stood up against the opponent and avenged his teammate by defeating him by 65 pins. The rest is history as Jacob went on to win the State Singles Championship. 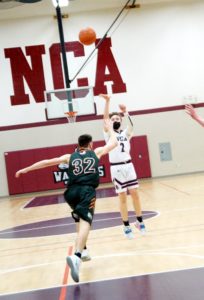 During games in the month of March, Max was 4th in scoring, 2nd in rebounds, and led the team in steals, assists, free throws and most importantly, leadership.  Max’s effort on both sides of the ball were an example to his team in competitiveness and commitment.  He is a joy to coach.  Congrats Max! 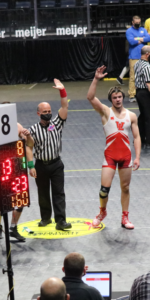 Rob placed 5th in the state this past week at the MHSAA wrestling state championships. He finished his season with a 21-5 record. Along the way he avenged his state finals loss from last season, and in his placement match dominated his opponent 14-0. 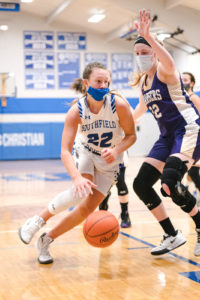 Rachel led the Lady Eagles Basketball team in scoring in the month of March, averaging 17.5 points a game while helping the team to their 2nd straight MHSAA District title and an appearance in the MHSAA Regional Finals.  Rachel scored over 20 points four times in March scoring a season high 26 points twice.  She scored 26 points in a victory over Whitmore Lake on March 2 and later did it again in the District final on March 27 in a win over Livingston Christian.  Rachel earned MIAC All-Conference 2nd team honors for the second time this past season. 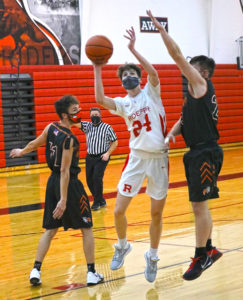 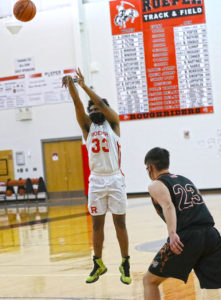 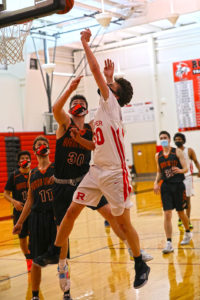 Our entire senior class for the boys varsity basketball team was nominated to be the athlete of the month for March 2021. In an untraditional year, seniors Andrew Albrecht, James Heath and Sam Kramer helped their team get through the ups and downs of the year. Over the last four seasons, their hard work, integrity and character helped lead the Roeper basketball program to a conference championship as well as winning over 70 games between the Varsity and Junior Varsity teams. Andrew, James and Sam are the kind of kids who are “the first to get to practice and the last to leave.” True definitions of the Student-Athlete, Andrew, James and Sam have started nearly 80 games on varsity while having an average ACT score of 31.5. The school and the basketball program are losing some of the most honorable, dependable, intelligent and trustworthy young men to go to Roeper in quite some time. They will be missed by both their teammates and their coaching staff